This week, I asked some of the powerful movement builders I know and work with to contribute to a piece about who they would like to celebrate on International Women’s Day. Their responses were both beautiful and heartening.

No one goes harder for their community than Veronica Morris Moore and Victoria Crider, lead organizers at Fearless Leading by the Youth (FLY) on the South Side of Chicago. These two women are at the forefront of the trauma center campaign, a coalition that uses nonviolent direct action tactics to convince the University of Chicago Hospital to reopen a level one trauma center on the South Side of Chicago. Constantly coming up with new ways to ambush the University, Veronica and Victoria don’t just call attention to the South Side trauma desert; their tactics have caused the University of Chicago―one of the most powerful institutions in the world―to respond to the demands of youth of color. In 2014 U of C raised the age of the pediatric trauma center to 18, and at the end of January hospital administrators began a feasibility study to bring a trauma center back.

None of this would be possible if Veronica didn’t fearlessly lead a group of south side youth chanting for a trauma center into the forest preserve in rural Illinois, where U of C was courting their donors; none of this would be possible if Victoria hadn’t testified in front of the Illinois Health Facilities and Services Review Board saying that it would be ludicrous to turn perfectly good hospital rooms into luxury suites while right outside folks are getting shot and can’t get the trauma care they need. None of this would have been possible if these two ladies didn’t put their bodies, voices, and freedom on the line, stopping traffic, locking themselves together, going to jail. I have had the immense privilege of fighting beside and learning from these women for the past few years, and when the history books are written I know future activists will be learning from them.

Rousemary Vega is the type of young woman who is ready to go on a moment’s notice when it comes to justice. She fought hard to keep her children’s school open. When it was closed, she didn’t pick up her broken dreams and walk away. She was galvanized to work for other kids and their schools. I am so fortunate to know Rousemary and the moms who are the backbone of a movement for educational justice.

Greta Holmes, Anti-death Penalty Activist When I sat down to write something about Greta Holmes, I had a number of experiences to draw upon. Time I had heard her speak at Campaign to End the Death Penalty conventions, prison holiday card writing potlucks, our mutual friend Darby Tillis’ wake- ever present there was Greta speaking truth to power, remaining steadfast for justice, and offering her compassion in times of need. She grew up in an African-American family intensely committed to working for social justice. The principles of fighting against injustice run deep within her.

A social worker by profession, Greta became involved in the Civil Rights Movement of the 1960s in her youth and has remained in the fight to this day. Greta has been and continues to be an intrinsic part of the CEDP. She served on their Board of Directors for many years- every time being elected by an overwhelming majority vote. She held our trust, and still does. She should be commended for her commitment to the abolitionist community.

When the Burge tortures came to light, she was one of the first that suggested the group become involved and reach out to survivors and rally the community. We can learn a lot from her example; she still has much to teach young abolitionists like myself and those to come. With women like Greta on our side, I believe that we will win.

Many of us know Mika Munoz as a benevolent, fierce femme that works ruthlessly long & labourous hours as a union pipe-fitter yet somehow manages to churn out powerful pieces of writing for zines & blogs, perform breathtaking, radical burlesque for your grassroots fundraising event until 2am, drive everyone home even if it’s means crossing the entire city, and still look flawless the entire time. But for many of us that are close to Mika, we bear witness to her extraordinarily difficult struggle as a proud Latina woman in trades, facing appalling amounts of sexism and white supremacy on a daily basis as she strives to fight the gender gap in the building trades.

Mika Munoz is a fierce, 28-year-old queer Latina with deep roots in community organizing around immigration reform, organizing with the Chicago Dyke March collective for two years, and co-founding Ella’s Daughters, a loose network of women activists and organizers who deeply respect, admire and strive to work in Ella Baker’s legacy. She is currently a collective member of Brown & Proud Press and often works 12-hour days, 5-7 days a week as a third year pipe-fitter. Mika’s background in organizing and resilience in the workplace has been incredibly inspiring and demands reverence. Mika’s ability to hold our communities together through unwavering mediation, an emphasis on accountability and addressing interpersonal conflict head-on, and relentless mutual aid is often unseen, yet incredibly invaluable. Gracias y muchos besos, Mika.

Often times, the work we carry as organizers goes unseen: The coordination, the check-in emails, the check-ins, the holding of space for reflection and discussion. Though essential, Sophia Kortchmar does this work with a humble persistence. Whether it’s welcoming me to the neighborhood or pushing me to appreciate the importance of shared reflection and processing, Sophia has patiently and lovingly supported my personal growth as an organizer. For all that she does, for the movement and the people involved, I want to say thank you. You inspire me to be more open, generous, and patient. You support all of us to be more powerful and fierce. I thank you. I see you. I appreciate you.

– Page May, Organizer with We Charge Genocide

“Celebrity Occupier.” “Radical Squatter.” These are names that tell part of a story. But, Sabrina Morey is more than the houses she reclaims, or her renown on the bullhorn. Sabrina Morey’s story has parts that are harder to consume than those for many social justice fighters, but these are parts of her strength too. The skills and deep commitments of a person whose life involves intimate struggle against structural violence in all its forms, are critically important to collective struggle. Survival isn’t one of the tools in Sabrina’s “organizer’s toolbox”, it’s the box that forges those tools, wielded with the urgency of someone who knows that people are struggling for the barest necessities, including the need to feel loved.

Sabrina brings much to the movement, and everyone who knows her and her brilliant daughters, Destiny and Keosha, are better for that relationship. We must also remember that deep solidarity means that we remember to ask, as another dear comrade  put it recently: “What’s happening with you? What do you need?” Sabrina asks this without  judgment born out of ideas about how the world should be, but a commitment to leave no one behind in a world that we must all survive together. Sabina has the limitless vision of someone who knows what it is to have nothing, badly needed to reclaim and rebuild the world as it never was. Cheers to Sabrina the liberator!

– Holly Krig, Organizer with Moms United Against Violence and Incarceration

What does it mean to bear witness?

Each of her photos a testament to the radical traditions in action, a historian of the moment of the movements that are shaping the now. As someone who is often following her home from afar, Sarah’s photography allows me to feel home from afar as well. Every time I see a new photo of hers I give thanks for and to Sarah Ji for allowing me to witness the fierce and beautiful people who remind me why I am doing what I am doing and to keep focused. The love and fire embraced in her art catalyze. Sarah’s photos are transformative and inspire transformation. Thank you for everything to bring into this world. 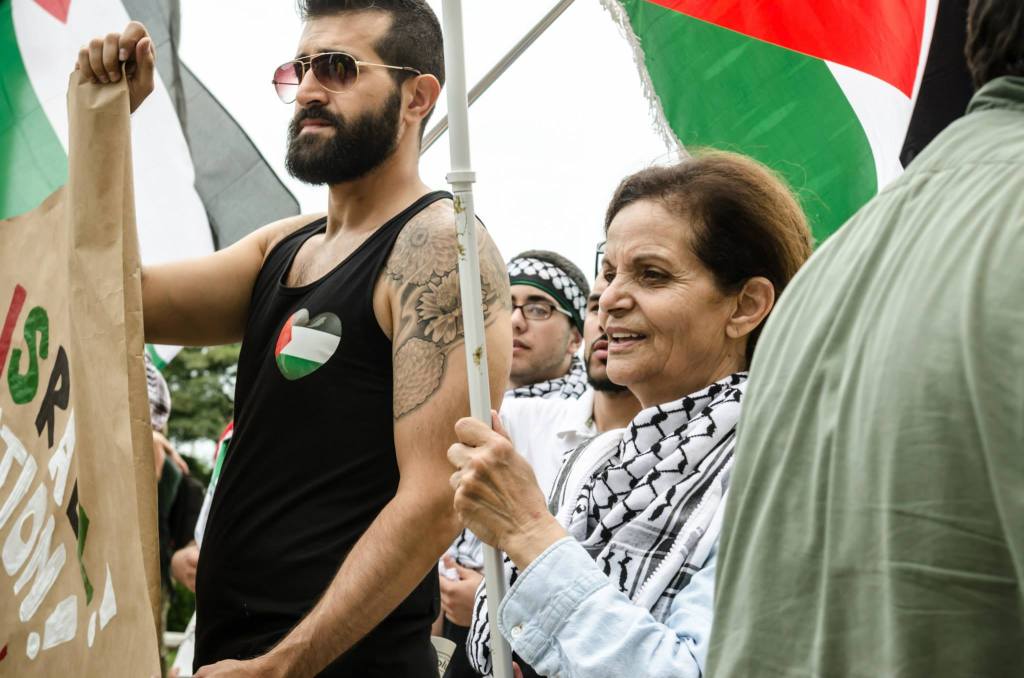 Today I would like to honor Rasmea Odeh. Rasmea Odeh is a 67-year-old Palestinian community leader who has worked with the Arab American Action Network (AAAN) on the southside of Chicago since 2004. Rasmea is currently the associate director of the AAAN. She also established the Arab Women’s Committee that has helped hundreds of immigrant women who came into the United States. She is a cornerstone for the Arab and Muslim community in Chicago and an inspiration to any organizer in this city who has a passion for social justice here and in Palestine.

On a chilly night in 2012, when The Mental Health Movement was holding its second nonstop vigil outside a shuttered clinic, Helen Morley, Matt Ginsberg-Jaeckle, and myself all piled into Matt’s car to try to get a bit of sleep. Helen, a patient who had been fighting the closure of her clinic, quickly drifted off to sleep in the front passenger seat. We could hear her, mumbling as she slept. After a moment, we realized that she was muttering a protest chant: “We’re going to beat back the Rahm attack. We’re going to beat, beat back…” With our spirits lifted by Helen’s beautiful love of community and resistance, Matt and I giggled softly, and closed our own eyes to sleep.

I will always cherish that memory.

As a member of the Mental Health Movement, Helen warned the city multiple times that closing half the city’s publicly funded mental health clinics would cost lives, including hers. But as far as Rahm Emanuel is concerned, those who live in the margins can die in the margins. It doesn’t affect his bottom line, and he has not felt their loss. But we have.

Helen and Jeanette, you are no longer here, but we carry you with us. This week, your friends made national news confronting the mayor who closed your clinics. Your community is still demanding accountability and the restoration of services. Your names are spoken, and your strength is with us.

– Kelly Hayes, Organizer with the Chicago Light Brigade and We Charge Genocide

Queer indigenous organizer and nonviolent direct action trainer with We Charge Genocide and the Chicago Light Brigade. View all posts by KELLY HAYES